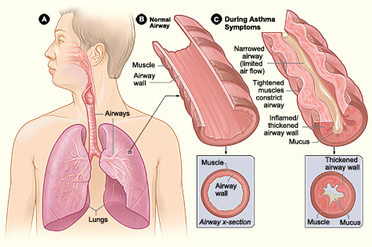 Asthma is a disorder or condition which inflames and narrows the airways of the lungs, making it much more difficult for an individual to breathe and lungs much more sensitive. Our lungs have airways that carry air in and out of our lungs. The most common symptoms of asthma are wheezing, chest tightening, coughing, and shortness of breath. When a person who has asthma inhales, they also tend to react much stronger than others to certain substances.

When the airways react to substances, muscles surrounding the airways start to tighten. A person with asthma has airways that constrict breathing, making it difficult for the person to let oxygen into the body.  It is also possible for the airways to get even narrower, causing breathing to become even more difficult. Mucus, a thick, sticky liquid that possibly causes the airways to contract even more, is also very likely to form a larger amount of inside the airways.

Asthma attacks usually vary in the amount of time they last, being anywhere from a couple of minutes to even a couple of days. Asthma usually begins when in childhood, however it still affects all ages.

Symptoms are very random when it comes to asthma. Sometimes, symptoms are simple and will go away after a short time with few asthma medicine. Sometimes, they will be very deadly and get even worse. When symptoms get worse, an asthma attack happens. They are also called exacerbations and flareups. Other symptoms may include: Pulling in skin between ribs when breathing, face color becoming blue, decrease in alertness level, rapid pulse, anxiety, sweating, chest pain, and abnormal breathing pattern.